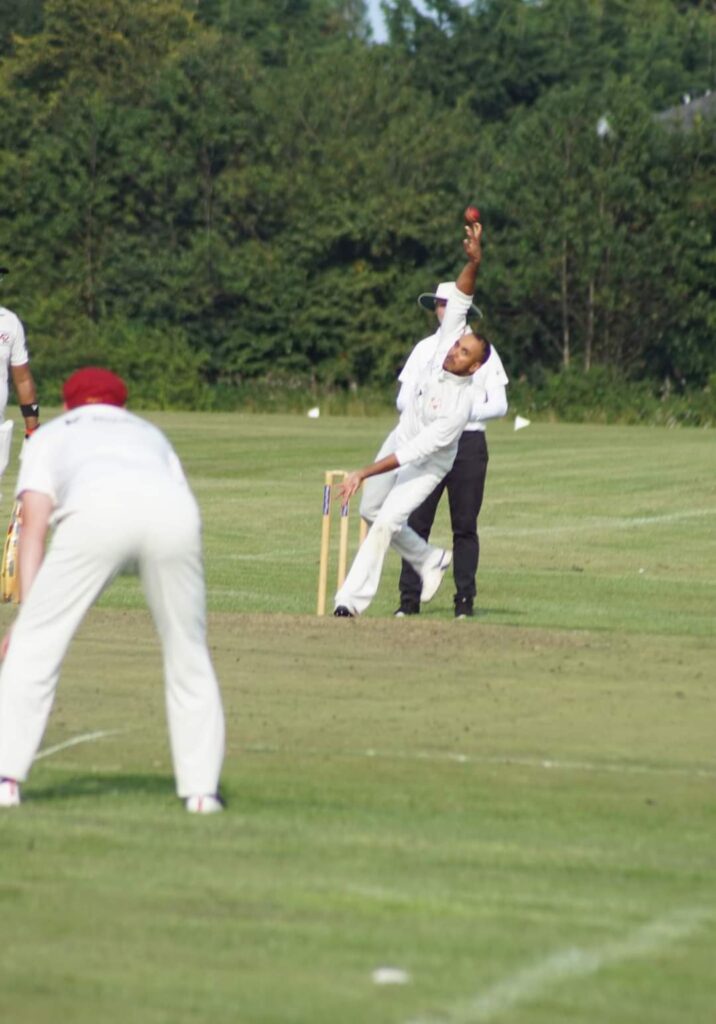 Gala 1st XI travelled to Cavalry Park to face Marchmont 1st XI in blustery yet sunny conditions. With good memories of the ground where they won the Championship last year, Gala were hoping for a repeat result from last August. Marchmont captain Keogh would win the toss and he put Gala into bat on what was a challenging wicket at times.

Gala would begin once again with Ponneri and Rutherford however, once again an early wicket would fall as Rutherford was caught behind in the second over with the score on 15. Eddie Eyre would join Ponneri and the pair would build a partnership seeing Gala past the half century mark, whilst Ponneri looked in good form as Eyre struggled to play himself in on the sticky wicket. Ponneri would depart shortly after however after the ball reached Gully as first chance Dyer struck twice in his third over bowling Indrasiri out 2 balls later. Eyre would not last much longer as he was bowled by Ahmed and at 69 for 4 Gala were in danger of a collapse. Fortunately for the away side it was captain Irvine’s day as he looked comfortable at the crease knocking the ball about for easy singles whilst also punishing the bad ball in devasting fashion. Khalia fell just before Gala reached the century as he was caught excellently by Fourie for 19. Rhode joined his skipper and also batted well in difficult conditions as he managed to rotate the strike giving Irvine as much time as possible to score. Unfortunately for the captain and vice-captain combo it wasn’t to be as Rhode was run out as Irvine looked for a quick single departing for 19 with the score on 153. Irvine then brought up his half century with five 4’s and a maximum before departing shortly after on 55. Gala’s demons of a collapse however would haunt them once again as the remaining wickets would fall with the Border side scraping up to 182 all out.

Khalia was given the nod to open the bowling again, the wicketkeeper showing some excellent skill with ball in hand as he and Scott Paterson took to the Marchmont order. Khalia managed to make an early break through in the third over thanks to an excellent catch from Rutherford at gully and then shortly after, veteran Paterson grabbed Gala’s second wicket with some great work from Eyre with the gloves on taking another good catch. Paterson then picked up another two wickets trapping opener Ahmed LBW and then bowling Panchal leaving Marchmont at 32 for 4 with Gala well on top. Tharanga was then brought into the attack replacing Khalia and he struck early trapping Mohapatra in front. Fourie provided some fight back against the Gala bowlers until he was dismissed thanks to a brilliant reaction catch with the ball coming racing through off the bat to first slip. Tharanga then gathered another 2 wickets for himself taking his personal tally to 4. Dyer then joined Amir with the score on 76 for 8 and the pair batted brilliantly, solidifying the innings despite riding their luck one more than one occasion. As the scoring rate increased, Gala would need to be cautious of the position they were in. With the fielding once again not up to standard and the bowling attack giving plenty of free opportunities for the Marchmont batters to score, Irvine and Gala would be relieved when Khalia managed to take a catch behind the stumps off of Indrasiri after he swapped into wicketkeeping with Eyre. Rhode bowled well and managed to top off his good spell with the final wicket of the game, bowling Amir.

Gala will be happy to come away with a win however, the worrying signs of all aspects are still there with a batting collapse, some poor fielding and disappointing bowling however, Gala come home victorious as they look to improve moving into next week. Gala 1st XI host Manderston on Tuesday night in the Scottish T20 qualifiers and then return home on Saturday as they entertain Linlithgow at Meigle Park. As well as these games, the 2nd Kinalba Cup fixture will be played on Thursday night.