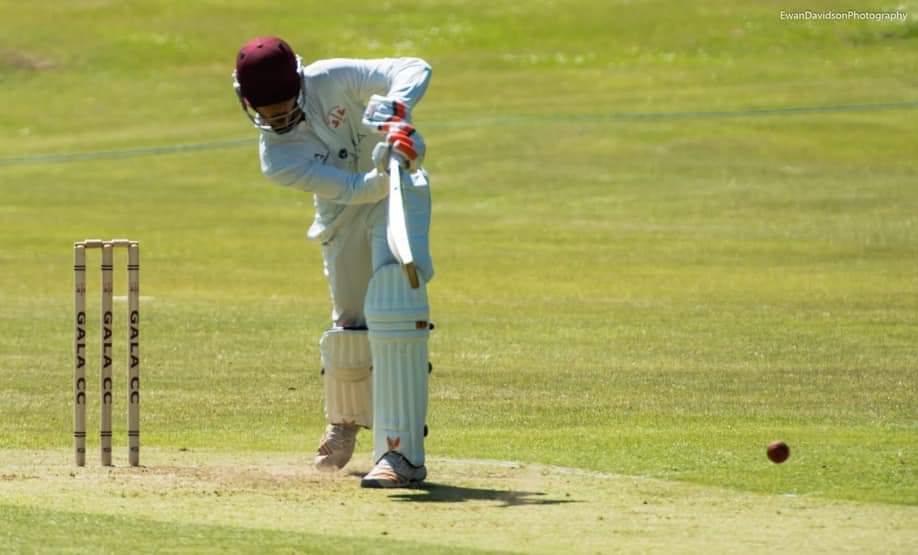 Inter-club matches bring a rivalry like no other and Thursday night was no disappointment. Great conditions for cricket, a pink ball, two young captains and players split into two teams resulted in a great game of cricket for the supporter. Finlay Rutherford captained Meigle and with Jamie Crooks his opposing captain taking control of Mossilee, the game gave all players from throughout the club a high degree of challenging competition as well as the chance to put their hand up for selection and with plenty of young players performing well the club can be immensely proud and happy with their improvement over the years.

Mossilee would bat first with Khalia and Sujan and got off to a flying start. Sujan would put the ball to the boundary twice until he was caught by McAneny off Bell for 8 however, Mossilee were still on top with the score on 48 for 1 after 3 overs. Club captain Irvine came in next and raced to 13 before McAneny and Bell struck again to give Bell his second wicket. After 5 overs Mossilee were 72 for 2 wickets and were at risk of a collapse however, Khalia was still in top form punishing anything in his arc. He and Crooks came together and put on an excellent partnership with Khalia bringing up his half-century in rapid time. Crooks played his part well, rotating the strike meaning danger man Khalia could punish the Meigle bowlers whilst Crooks himself managed to put the loose delivery away. Khalia raced to his century with some excellent striking of the ball and as he brought up his three figures which included 14, 4’s and 4, 6’s. As Khalia brought up his century, he retired bringing Tharanga who played his role well in ensuring the strike was rotated. Crooks made a half century before he was out LBW to Nick Murton as he looked to increase the pace. Youngster Robbie Paterson then came in and played some lovely shots as he on 12 and Tharanga on 16 finished unbeaten as Mossilee set Meigle a total of 225 to win.
Ponneri and Rutherford would open for Meigle and Ponneri showed intent from the off as Maceira and Khalia bowled well in trying to restrict the opening pair. Maceira gained a well-earned wicket as she had Rutherford caught at mid-on in another excellent spell, carrying on recent run of good form. Eyre and Ponneri then worked to knock off the total and the pair will have worried the Mossilee players as they continued to up the flow of runs. Ponneri worked the ball to the boundary numerous times before he was excellently caught behind by Irvine off the bowling of Robbie Paterson who also performed well in his spell of 4 overs. Rhode would come in and continue where Ponneri left off as he then took to the Mossilee attack putting the ball to the boundary numerous times. With the game getting tighter with every ball, Eyre would raise his bat as he reached his half century just before Rhode would be caught in the deep excellently by Khalia off of an excellent penultimate over by Toor.

Indrasiri and Eyre then had work to do as they needed 28 off the final over however, with the smaller boundary on the leg side the pressure was all on Gilchrist. For Mossilee and Crooks it would be relief as Gilchrist held his nerve in the last over only allowing 24 runs from his over despite the best intentions from Indrasiri (14) and Eyre (71) leaving Mossilee with bragging rights after game one winning by 3 runs.
A great night up at Gala Cricket Club with some great performances from both young and experience helped create such a tense and competitive atmosphere. The club can be incredibly proud of how their players are developing, providing games like this. The 2nd Kinalba Cup game takes place on Thursday where the two sides will go to battle once again.

Gala vs Heriots 2 (On time)