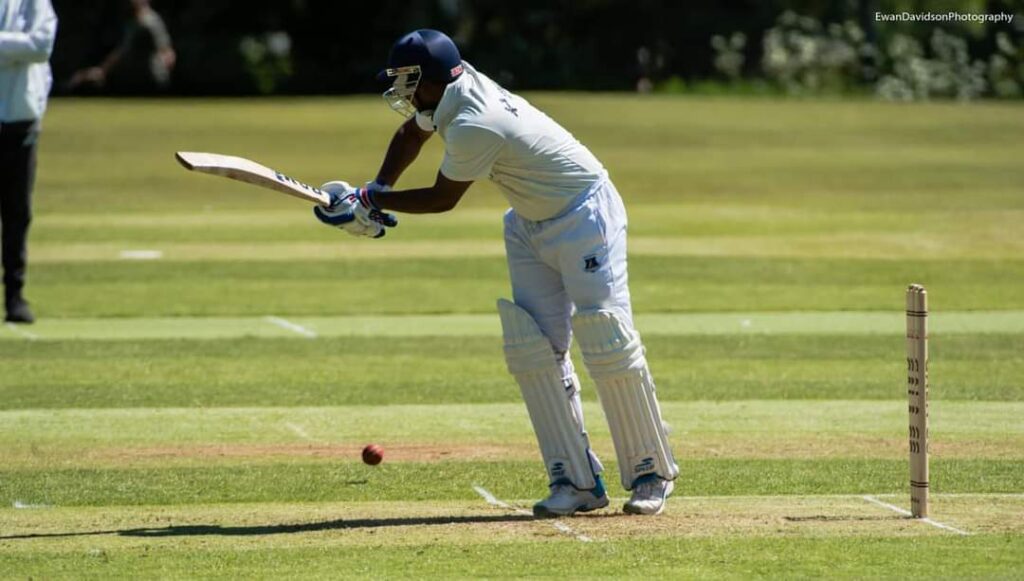 Gala 1st XI hosted Hawick and Wilton 1st XI on Tuesday night in what was the home sides third fixture in the Border T20. Again, skipper Josh Irvine opted to give 2nd team players a chance including captain Craig Thomson, alongside a handful of youth players. Hawick would win the toss and batted first at Meigle Park.

2 early wickets would fall for the visitors after Indrasiri brilliantly ran out Justin Tait and then shortly after Skeldon struck as Gareth Welsh cut one aerial to Sam McAneny leaving Hawick 2 wickets down with 1 run on the board. Evan Alexander and former Gala player Robbie Pringle then came to the crease with Alexander playing himself in well nurdling the good ball about and punishing the bad ball. Pringle then looked to increase the run rate however was found to be short of his ground looking for a quick single thanks to a brilliantly executed direct hit from Finlay Rutherford. Stuart Hair then joined his captain Alexander at the crease and the pair did excellently to push Gala hard in the field. Gala’s fielding was questionable at points dropping Alexander a number of times as he pushed on and raised his bat for his half century. He and Hair would then complete the Hawick innings unbeaten as the visitors reached 122 for 3 wickets after their 20 overs. Hair finished on 18 and Alexander led the charge as he came in at the halfway stage 80 not out.

Khalia and Eyre opened the batting for Gala however, the former was dismissed early on by Johnston for 6. Shortly after Irvine was bowled from a peach of a delivery from Pringle and Crooks would join Irvine in the clubhouse shortly after when he chipped the ball to midwicket 2 balls later, both batsmen failing to trouble the scorers. Indrasiri would join Eyre and the pair did an excellent job in chasing down their target with confident shots both rotating the strike and powering the ball to the boundary. Indrasiri would bring up his half century as Gala closed on the total however a mix up with Eyre on a single shortly after meant Eyre would be run out on 38. Rutherford then came in and he and Indrasiri took Gala across the line, Rutherford finishing on 6 and Indrasiri 67 as Gala reached their total in the 16th over.

A disappointing fielding display will frustrate captain Irvine however, credit where it is due Alexander batted well and kept powering on despite finding the Gala fielders on a number of times. A small batting collapse at the beginning of the innings will also trouble Irvine however he will be relieved that the team managed to grind out a win. On Thursday, the first of a three game intra-club series begins as Crooks captaining Mossilee and Rutherford captaining Meigle look to compete for the Kinalba Cup. The 1st team then travel to Cavalry Park to take on Marchmont in the eighth round of ESCA Championship fixtures.