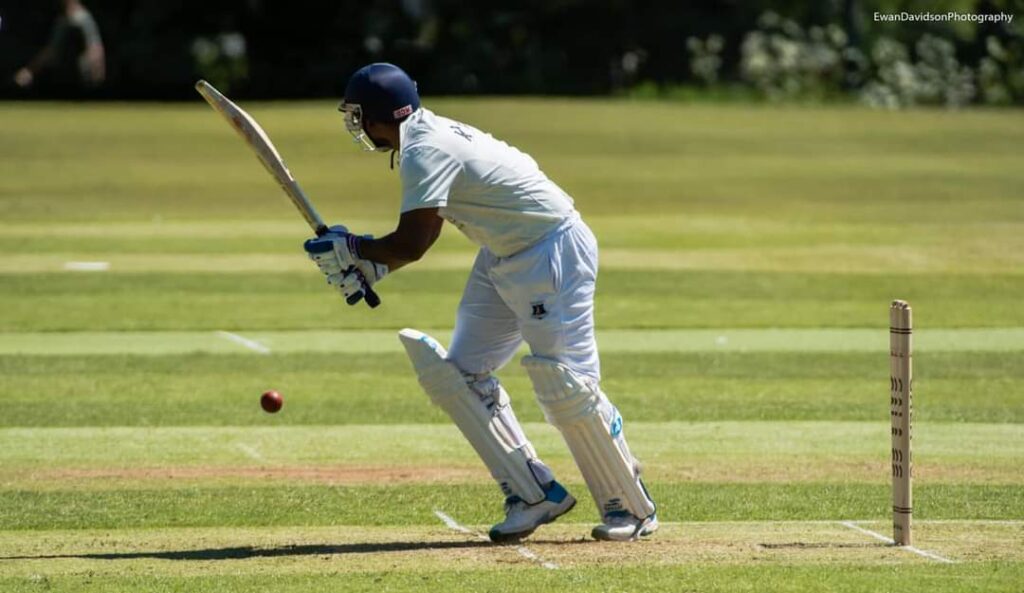 The shining sun and little breeze made for scorching conditions at Meigle Park on Sunday where Dumfries travelled to play Gala in the Scottish T20 South Qualifier, with the winner heading to Stirling for finals day on the 24th of July. Gala would be put into bat first in what was perfect conditions for cricket with a good wicket prepared and fast outfield.

Gala would open with Khalia and Crooks and the pair would go out hard at the pink ball as they looked to take advantage of there only being two men allowed out of the 30-yard circle. In the early stages the Gala batters managed to find the boundary easily as Crooks found his form attacking the offside whereas Khalia dealt some deadly blows straight back to the bowler. After the powerplay Gala would be 72 for no wickets after 6 overs. Khalia and Crooks would then be made to work hard for their runs as boundaries became hard to come by however Khalia still managed to clear the infield on 2 occasions. Crooks managed to get his release shot through a reverse sweep that ran down the hill for 4 however after this, Khalia would then depart not long after for 66 as he was caught in the deep, setting up Gala nicely at 102 for 1. Indrasiri would join Crooks however it would not last long as Crooks danced down the wicket to Staples who managed to slide one past, bowling Crooks for a supportive 32. Irvine, Eyre and Rhode would all join Indrasiri but all fail to make it to double digits whilst their Sri Lankan partner did the damage at the other end. Dumfries did well to get back into the game as they really slowed up the scoring rate of the home side however, towards the close of the innings Indrasiri found his timing and put the ball to the boundary on multiple occasions as he reached 52 before being bowled by Hobman. Tharanga would be joined by Finlay Rutherford but neither would score with Finlay Rutherford being run out on the last ball with Gala posting 179 for 7 wickets.

Harris Rutherford was on top form again with ball in hand as he found his line and length early on, managing to bowl Adid with the score on 2 and then strike again with the score on 24 as he bowled Thornely for 6. Dinesh Tharanga showed his class with ball in hand as he had Van Zyl caught behind by Khalia for 14 with the visitors struggling at 33 for 3. Crooks and Indrasiri would then pair up once again to attack the batters with spin from either end. Crooks managed to take two wickets in his first over, bowling McGrath and then Smit mistiming a cut shot to Indrasiri at backward point. Indrasiri then grabbed a wicket for himself as well as a run out before Crooks took the 8th wicket and his third. Robbie Paterson had a chance of a wicket as McCutcheon looked to go big in the final overs however, he was put down in the deep by Crooks running into a difficult chance. No other wickets fell despite Paterson and Rhode’s best efforts meaning Dumfries fell short of the Gala total, scoring 125 for 8 after their 20 overs.

The win means Gala will travel to Stirling on the 24th of July, returning to finals day again along with Forfarshire, with the Edinburgh and West qualifiers still to be played. The club will run a coach up to support the team so if you can, the boys would love your support! The 1st team are next in action when they welcome Morton to Meigle Park on Sponsors day next Saturday.